When learning a language it is equally important to learn about the culture, the history and the society in which the language is embedded. In the UISS program we offer a lot of extra-curricular activities during the week in order to acquaint our students with Swedish customs and traditions, the Swedish culture and society. Also excursions to various parts of the country on Fridays are an integral part of the course and allow students to experience the diversity of cultures, traditions and landscapes within Sweden. Last but not least we arrange longer trips to Finland and Lapland for a reasonable extra fee. 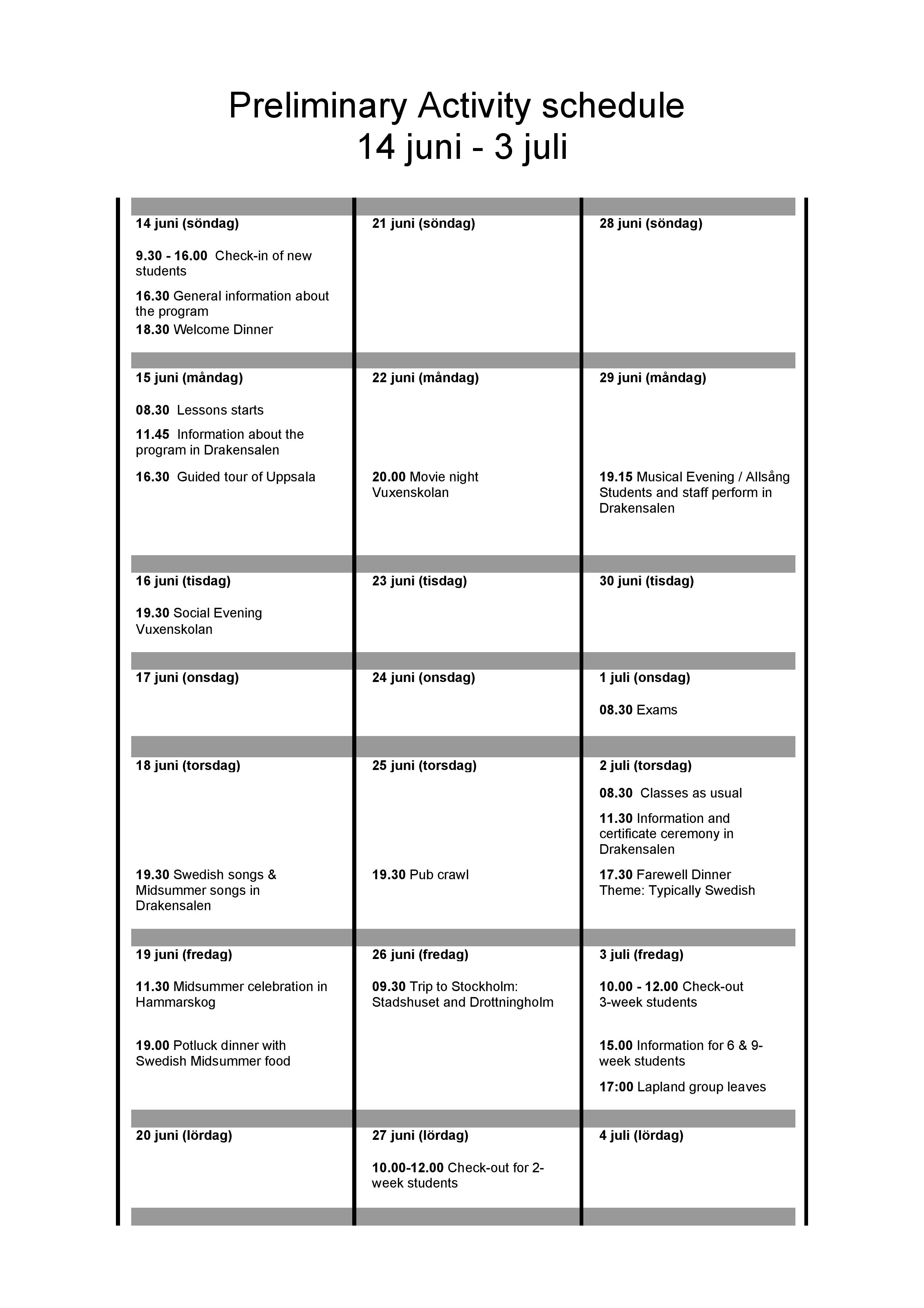 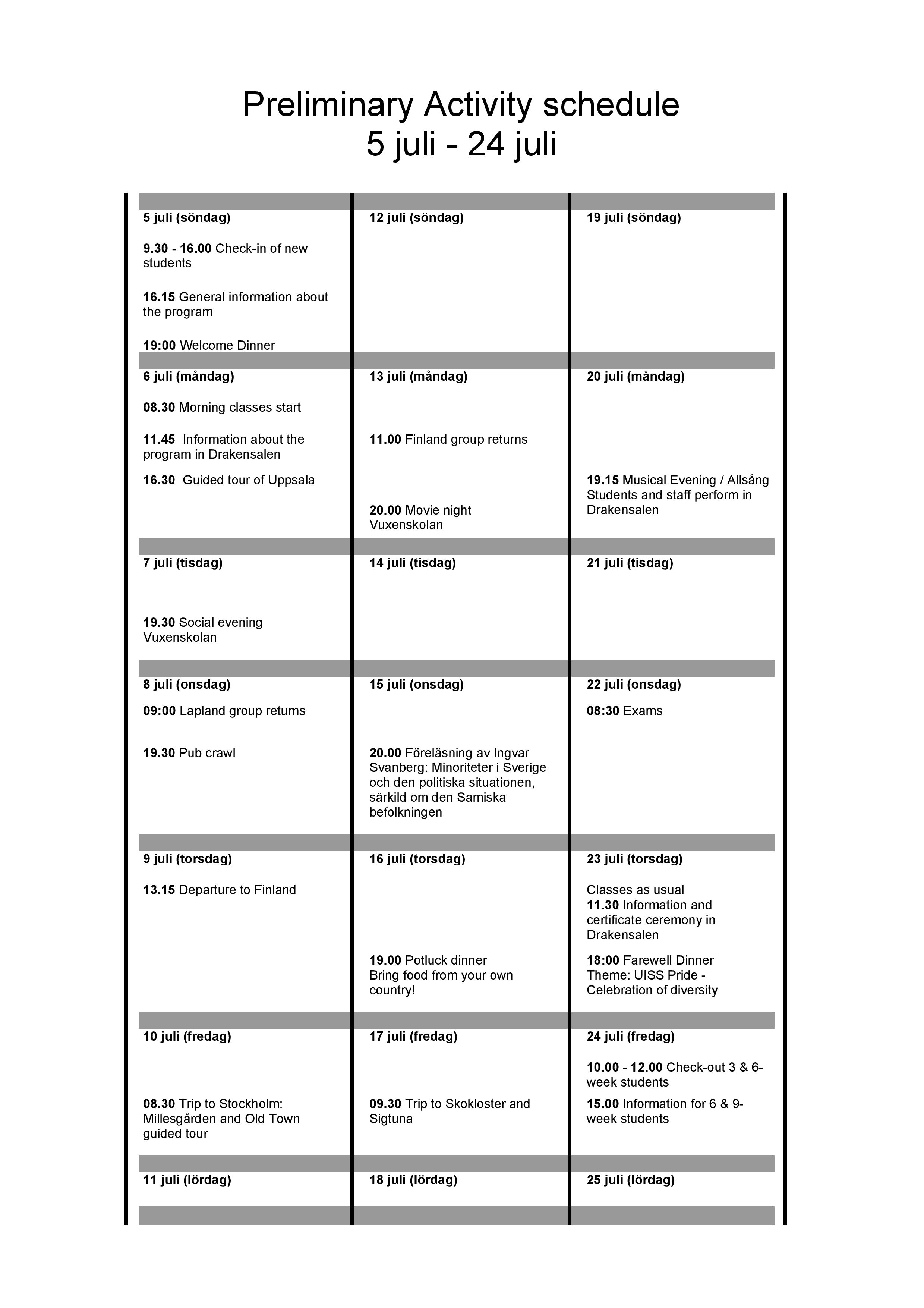 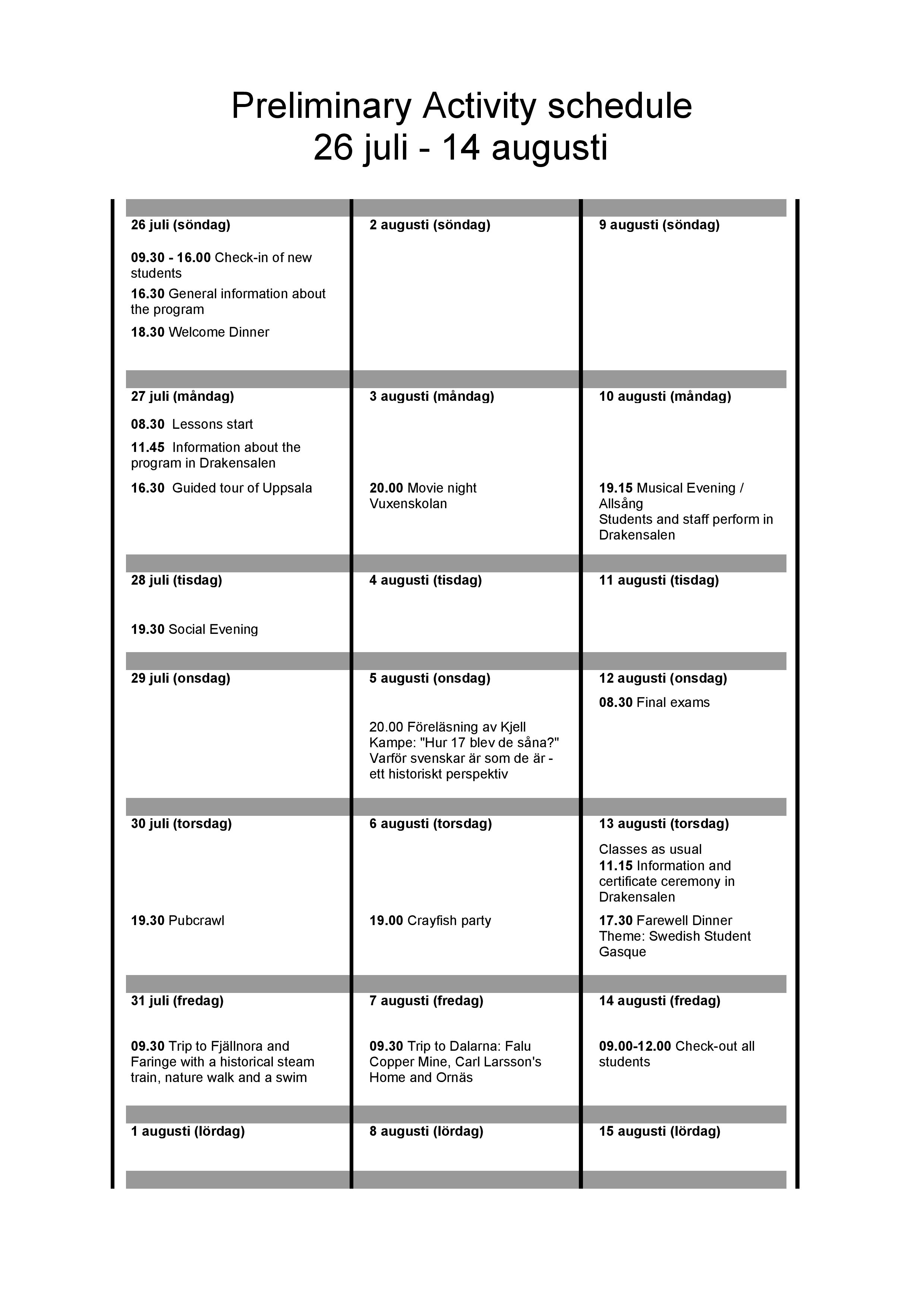 We also created a Google Calendar for the preliminary activity schedule. You can show this calender in your own Google calendar. Follow Googles instructions concerning How to add a friend’s calendar if you are unsure how to proceed.

The email address needed to find the calendar is uissuppsala@gmail.com. Please note that e-mail to the program staff should be sent to director@uiss.org.

Several activities on week nights give you an opportunity to familiarize yourself with Sweden, the Swedes and the Swedish culture. It is also a chance to get to know your fellow students.

Midsummer, a traditional Swedish celebration of the start of the summer.
Social evening, a fun evening during which students get a chance to get to know each other.
Musical evening, students and staff sing and/or play an instrument, we’ll sing some ABBA songs and other Swedish pop songs together.
Potluck dinner, all students cook a dish from their home country to create an international buffet.
Kräftskiva, a traditional Swedish crayfish dinner.

We invite speakers who are experts on various subjects:

On Fridays, UISS arranges fieldtrips to various places, usually in or close to the Stockholm-Uppsala area.

ABBA The Museum is more than an ordinary museum. Naturally, the members’ costumes, gold records, original items, memorabilia, and much, much more are here. But at this museum you are an important part of the experience! We simply want you to experience the feeling of being the 5th ABBA member. To find out what you would look like in their legendary stage costumes, to sing at the Polar Studio, to experience exciting hologram illusions, and to enter the stage together with the band. Your material will be recorded on your personal ID number on your ticket.

Famous painter Carl Larsson lived and worked at the turn of the 19th century. His wife Karin was an artist as well. They created one of the most modern homes of their time.

Drottningholm Palace is on UNESCO’s World Heritage list. It is the most well-preserved royal castle built in the 1600s in Sweden and at the same time is representative of all European architecture for the period.

The combination of the exotic Chinese Pavilion pleasure palace, the palace theatre and the magnificent palace gardens make a visit to Drottningholm a unique experience.

Influenced by French prototype, the palace was built by architect Nicodemus Tessin the Elder by commission of Queen Hedvig Eleonora. A number of royal personages have since then left their mark on the palace.

The Palace is Their Majesties the King and Queen’s permanent home residence. The rooms in the southern wing of the palace are reserved for this purpose. The rest of the palace and grounds are open to the public year round.

Falu Gruva was world famous for its copper and is now a World Heritage Site. The income from the mine made up a big part of Sweden’s economical base. At times the mine made up for nearly two thirds of the world production of copper.

The old town of Stockholm dates back to the 13th century and consists of medieval alleyways, cobbled streets and beautiful architecture. The area has the biggest range of restaurants, tourist shops, studios and museums, situated along beautiful narrow streets.

Be prepared for a truly unique experience! You get on the wagon, drawn by a historic tractor straight out into a dense, Swedish forest and meet the moose in their natural surroundings. The guide, Leif (”Leffe”) Lindh, has a close relationship with all of the animals in the park. He is the first and only person in the world who has swum with these stately animals in their natural environment.

An oasis just 10 minutes from downtown Stockholm. Millesgården is a museum with antique collection, sculpture garden, art gallery and restaurant.

The Silver Mine in Sala was during a long period of time Sweden’s biggest producer of silver and periodically one of Europe’s most important producer.  The precious metal has been very important for Sweden throughout many years, why the state contributed with donations and subsidies for the mining. The mighty king Gustav Vasa, regent in the beginning of the 16th century, called the mine the State Treasury.

Sigtuna is a picturesque little town founded in 980 AD and the first town in Sweden. Much of the original town plan remains today.

The castle of Skokloster is the largest private castle ever built in Sweden and even compared to other castles in Europe it is a unique place to visit. It is a vivid reminder of Sweden’s Age of Greatness, the 17th century.

The city hall in Stockholm is one of Sweden’s foremost buildings in the national romantic spirit and hosts amongst others the annual banquet for the Nobel prize winners.

Vasa was a warship that sank after sailing less than a nautical mile into her maiden voyage in 1628. She was salvaged largely intact in 1961 and is now one of Sweden’s most popular tourist attractions.

On Friday night a train takes you to beautiful Lapland where you will meet your guide. You hike to your base camp, where you will cook your dinner and enjoy the spectacular views. Sunday you will hike to Vallespiken. Monday you’ll hike back to the civilized world. Tuesday is spent in Jokkmokk until you leave for Uppsala, where you will arrive on Wednesday morning and resume your studies. 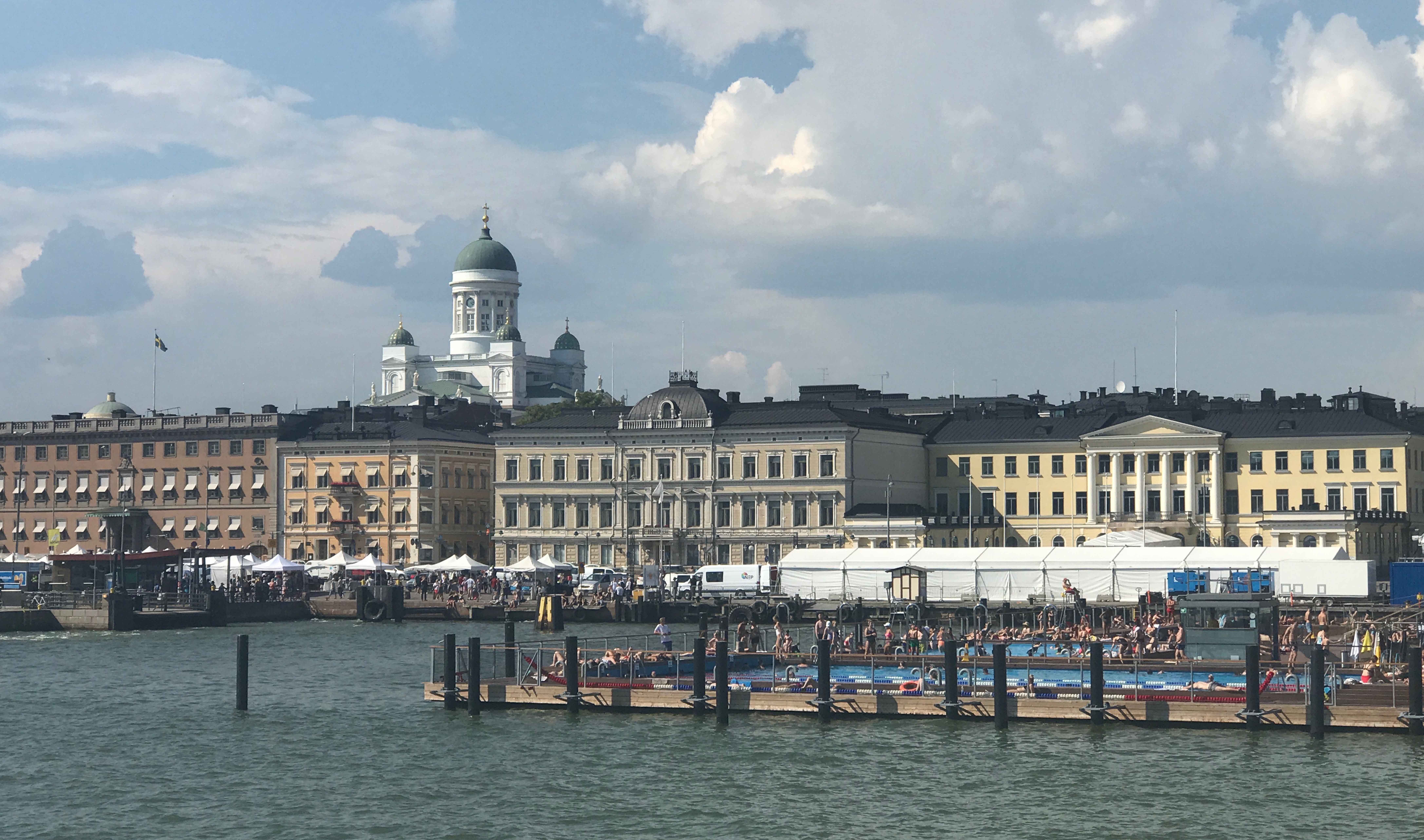 You leave on Thursday, boarding a cruise ship which takes you to Helsinki. You’ll enjoy a fantastic buffet while cruising through the Swedish Archipelago. The long weekend is spent in Helsinki, and you can even take a day trip to Tallinn. Sunday evening you board the cruise ship again which takes you back to Stockholm. Monday morning you are back in Uppsala to resume your studies.